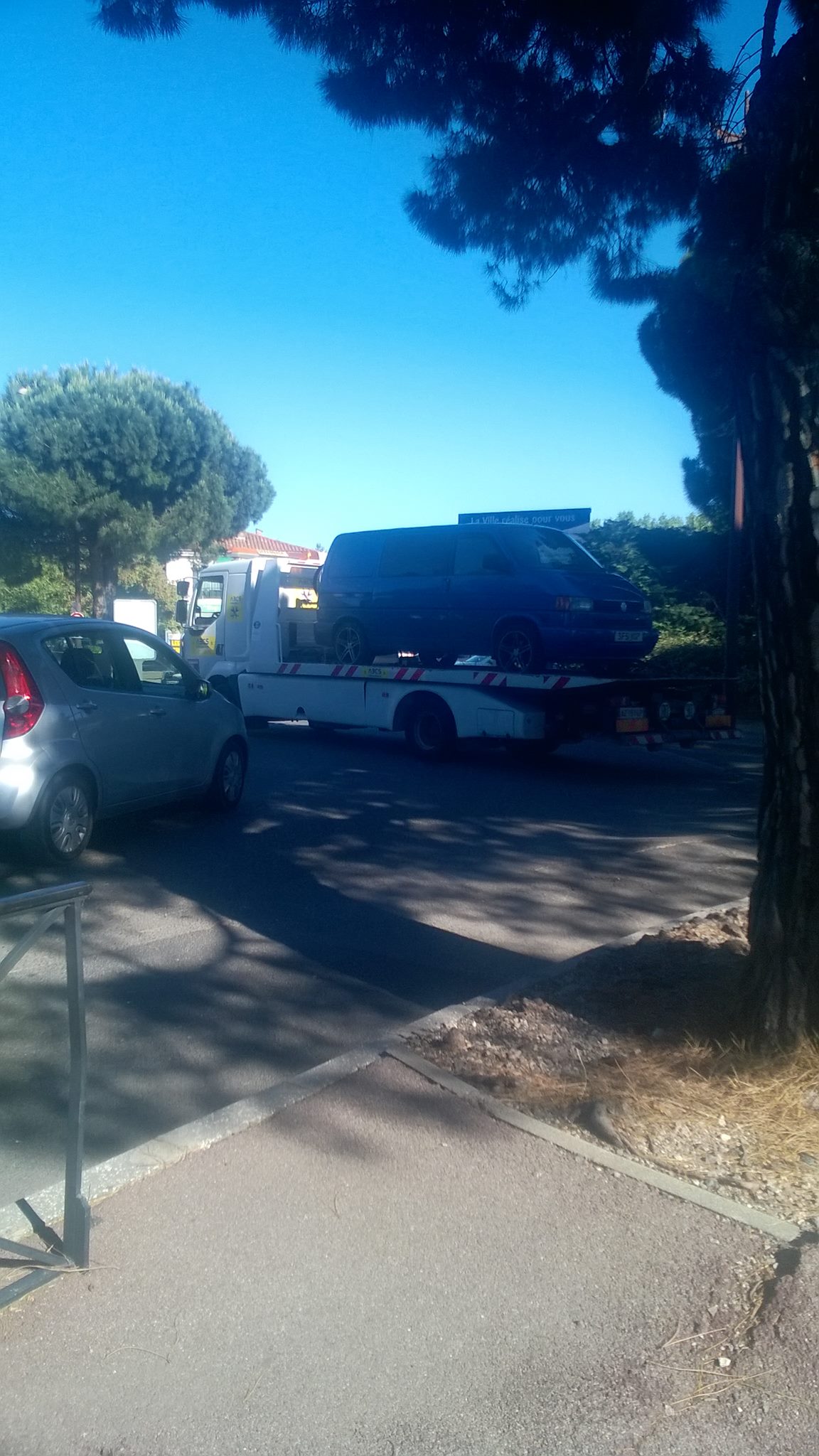 There seems to be some sort of pervy men convention taking place here.  Its as if someone’s done a shout out to let them know I’d be travelling on my own and feeling vulnerable. Seriously. It’s an epidemic. Swarms of them out in their seedy masses. Leering, sneaking, winking, shouting. Please leave, I’d like to commune in pleasancy. You’re eating into my enjoyment.

It’s like they know I’ve lost my beautiful blue shell, my cave to hide in, my escape vehicle, my smidge of safety. My heart, on the back of a pick up truck.

Despite now being on foot, I still only appear capable of travelling along the ugliest main roads, as though I’m determined to see the world on the route my van would take. On my back, the most haphazard collection of items, gathered in my panicky haste before my van was towed away- each potentially useful, had I remembered to bring the essential element that would make them work. But alas, they are at best completely redundant.

I am walking to Saint Raphael, apparent playground for the rich and famous according to the guidebook, and it doesn’t disappoint. Unless you don’t want to be in a playground for the rich and famous, in which case it does. In my case it does. At the same time though, remarkably, it still manages to cater for the lover of horrendous touristy tat in souvenir shops and bars and clubs that wouldn’t be out of place in Benidorm (so I’ve heard). Still, at least I’m not stuck here. Oh, wait.

So, the van. After I wrote the last post, I set off to Frejus. The journey went fine and I managed to gather enough oomph to carry me along the motorway all the way to the outskirts of town.

An overly keen moustached man pulls alongside me as I try to avoid his intense gaze, which continues for what seems like forever. The lanes merge and he ends up behind me, following every new turn I make. I eventually shake him off as I make a quick unannounced turning off the road.

Within seconds of getting through the first challenge, my gear stick becomes completely loose. I can’t get into any gear but fourth, which is problematic when stuck in near grid-lock traffic. I manage to keep the van moving, just, by ramming the shit out of the clutch and accelerator. All the while angering a number of aggressive drivers at at least 8 roundabouts- unable to get the van moving in time to pull out as each space appears, and then having to take a leap of faith and pull out too close in front of cars already on the roundabout. Only 3 near crashes, though. I manage to make it into a car park, but without the use of reverse or any lower gears, I then get stuck diagonally across a parking space blocking in 2 other cars.

I patiently (not so much) wait until another space becomes free that I can pull in to without too much of a performance. By this time, I am so desperate for a piss I decide to hedge my bets and resolve to go in an old milk bottle in the back of my van. I have varying degrees of success with my aim and manage to get it all over my hand. And a bit on the floor… and, in an absolute stroke of luck, it appears my van is parked on just enough of a slant that a small channel of piss breaks into 3 smaller channels and, remarkably, manages to make its way into all 3 of my cupboards. I hurriedly clear it up, and then accidentally kick the bottle of piss over and it again, fills all 3 cupboards, except this time much worse. Then the mechanic arrives. I have chance to clean a small portion, but the the remainder will be dealt with if and when I get my van back. Joy.

I am in Frejus… But van is now in Saint Raphael. I try to get train to van but alas, rail strike.

And so now, here I am, in an overly exquisite hotel in Frejus. In another lifetime, I would have been ecstatic at my luck. But I’m here, ready to start my adventure; and being catered for hand and foot doesn’t leave much space for feeling brave.

Before Nick and I parted, I imagined my first stint alone would be full of adventure and bravery. I worried about my safety and tried to imagine where I might feel most comfortable, amongst people? In the wilderness? It dawns on me that travelling in search of safety is not courageous. It’s not what I’m here for. I don’t want to be amongst swarms of rich tourists on the South coast of France. I want to find some quiet piece of coastal path where I can think, write, sing and be alone. I want to find something real, something authentic. Not some pantomime put on for tourists who have too much money and not enough imagination. But maybe that’s not authentic. Maybe that Southern France doesn’t exist.

I’m sick of being in the audience, watching, waiting for the show to start. I’m here, now. When will it begin?

This site uses Akismet to reduce spam. Learn how your comment data is processed.